End of the year review of VR video streaming industry

DeoVR could be used by websites and developers for VR video streaming either direct from their servers or by using turnkey DeoVR encoding, storage and CDN solutions. Partners may use their branding as well.

This is the DeoVR global streaming map accounting for petabytes of VR video data streamed on a monthly basis: 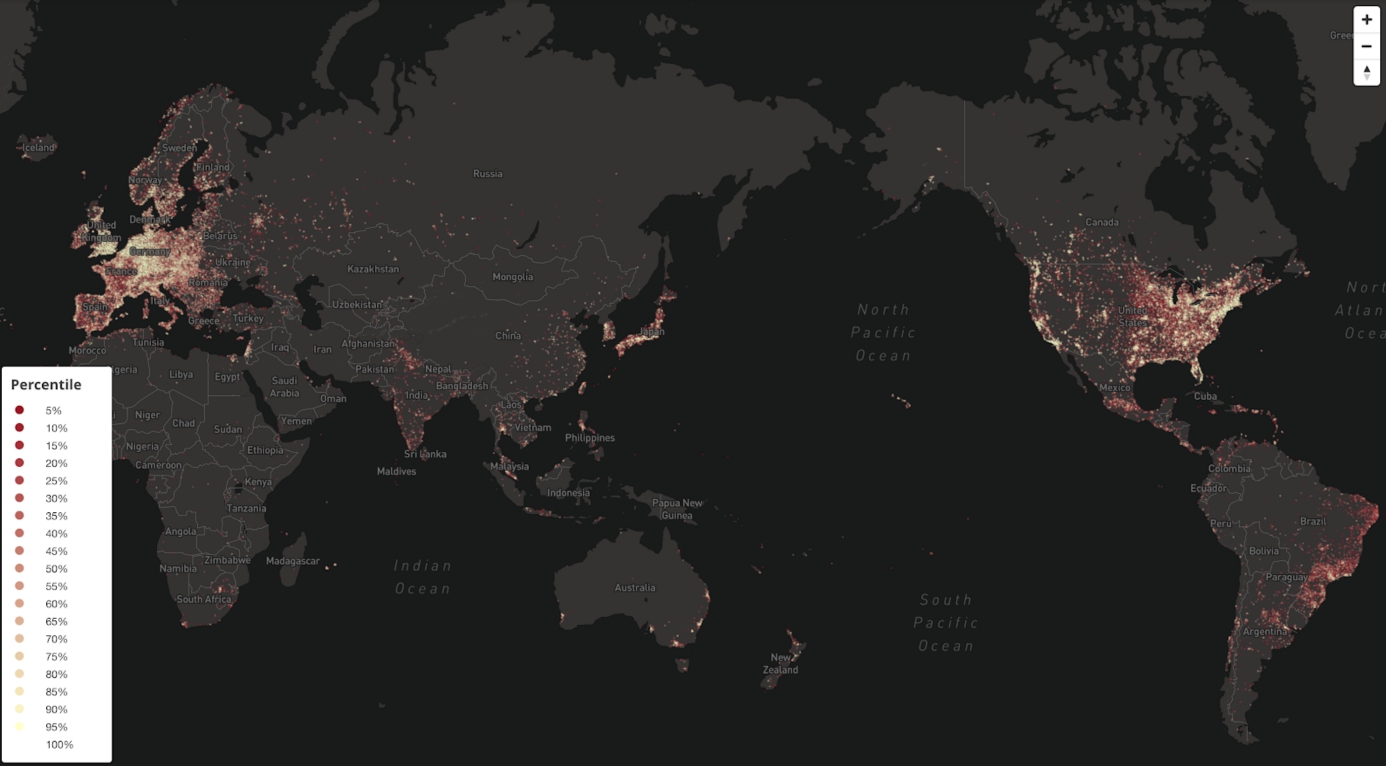 The vast majority of videos streamed from the DeoVR servers are 5K/6K 60FPS 180º stereo. While there are a fair amount of 360 videos, these have much smaller share of the viewership. 360º videos are of lesser value due to the stitching artifacts inherent in the 360 format versus the more “natural” 180 two-camera setup. As VR headsets provide a smaller than natural FOV, it takes much more rotation to see the area behind you than it would naturally. This significantly diminishes the value of the 360º experience. This kind of content becomes much more engaging on headsets with an extra wide FOV - however, these are mostly prototypes with only a few, such as the Pimax 5K or 8K available on the consumer market. 360º footage is still great for certain VR experiences, that rely on greater immersion, and so this is the format of choice for VR film festivals and other films of particular purpose.

180º videos are mostly produced using GoPro stereo camera rigs or the ZCam K1 Pro. Early 2019 saw a promising announcement about the ZCam K2 Pro coming to market with hardware 6K 60FPS, but we can’t see it ever being released. If it was released in 2019 it would have become a reference camera for the current generation of VR video. 360º videos are mostly created with the Insta 360 Pro.

The major progress in VR video comes from producers getting better at directing, storytelling and angles in VR. The value of storytelling in VR is finally coming to life.

People’s impression of VR video today is some distance from what the hardware can actually deliver because of multiple poor experiences they had in previous years. We see a lot of frustration with VR videos from those who didn’t care to put all the pieces together, including video industry professionals and high budget corporate solutions. DeoVR’s one-click streaming ensures proper video specs that perfectly match headsets with the highest possible performance.

In 2019, most VR videos were watched with dedicated headsets, either these connected to PC, such as the Oculus Rift S, HTC Vive Pro or Windows Mixed Reality, which basically share the same framework, or all-in-one headsets like the Oculus Quest and Oculus Go. Mobile headsets like the Google Cardboard, Daydream and Samsung GearVR are no longer supported by newer phones. There aren’t many updates released for them and their userbase is declining, though it still accounts for 20% of total users. On the other hand, this figure reduces to 16% when it comes to time watched. These were never designed specifically for VR and are easily outperformed by all-in-one headsets.

As a part of its quality standards, DeoVR converts 30FPS videos to 60FPS with interpolation tools that calculate the differences between two frames and generating an intermediary one. This softens movements in videos and significantly improves user satisfaction. Also, it matches the 60Hz mobile headset screen refresh rate. Starting from early this year, 60FPS became the default standard for our services. 5K/6K resolution videos are provided, with up to 40 Mbps bitrate versions for premium streams. Our metrics show that VR users tend to have a lot of bandwidth so there’s no good reason to cut on quality.

Most mobile chipset headsets, including the Oculus Quest and Go, are limited to 4K 60FPS playback. We use Viewport technology to stream original quality 5K/6K videos on these headsets by splitting the image into dozens of pieces and playing them simultaneously. We can see Viewport technology actively used on the Oculus Quest and Go. The next generation of mobile chipsets will have 2x the pixels and 2x the decoder rate that the Go/Quest have. With 8K becoming the next decoding standard, it will provide a bit more resolution than optimal for the displays. This extra resolution is beneficial for zooming at no quality loss (a really popular feature in VR). 6000x3000px videos will play natively at 60 fps on upcoming chipsets, and at 30 fps on today’s chipsets.

We interpolate videos up to 120FPS for the Valve Index. We’ve had great feedback on this compared to 60FPS footage. We were already providing 90FPS files for the 90Hz screens found on the Rift, Vive and Windows Mixed Reality headsets. The maximum decoding resolution for 120FPS is 5792x2896 with Nvidia 10xx/20xx GPUs. After decoding, 2896x2896 180º video is projected on the screen for each eye 1,440x1,600 via 125º FOV resulting in 2011px projected onto each side of the screen. Viewport adaptive streaming should overcome these resolution limitations. We’re finally bringing it to Windows platform.

It’s expected that 8K/10K 120FPS 180º videos will become the ultimate standard for the current generation of VR and could be streamed with Viewport to overcome decoding limitations.

The DeoVR web player is one of the most used in-browser WebVR/WebXR players. Do not confuse it with the DeoVR native app that needs to be installed on a headset as a separate app.
WebVR was meant to be a universal tool like Google Cardboard. Currently, it’s a pretty terrible way to do both browsing the UI and VR video playback, though it has a huge potential to evolve. You can navigate with your desktop browser to a video site with WebVR player. Initially, you watch VR video in a flat projection then you click VR mode and continue in VR with your headset. There’s no way to get straight into VR mode with the current WebVR standard but it’s going to get fixed with the upcoming WebXR standard.

Another option is to navigate to a VR video site with a VR browser within a headset. Oculus Browser is the only decent option when it comes to native VR browsers. It uses the Chromium decode path for video playback. Unfortunately, Oculus refuses to support third party applications within their browser, which would allow for playing immersive video with a native video player decided by the website owner, with much higher performance of current WebVR options.

It’s worth mentioning that WebVR performs better following the recent update in October 2019.
We recognize these two typical user-flows:

DeoVR’s monthly content distribution of petabytes of VR video data shows the ratio of video previews in the native app compared to WebVR, in time watched, as 65% to 35%, with 11% of WebVR viewed in VR mode. For full-length content, native apps count for almost 90% of viewing time, with WebVR accounting for 7% used in VR mode and 4% in flat and sphere modes. We can see more video sites implementing http://DeoVR.com/doc.

We are looking into lightfield videos, though the whole infrastructure is not there yet. In the next 2-3 years we should expect the first lightfield still images. Cameras appear to be the easiest element of the equation, while codecs and hardware decoders seem to be more of a problem. The rest will pick up.

A brand new codec, AV1, will start to be deployed in 2020. It seems to be performing on a par with h.265 and should mostly solve licensing ambiguity. Qualcomm does not announce any plans to support it, which means standalone headsets won’t be able to use it.

5G technology with ultra-low latency could be beneficial for all kinds of VR, especially VR video streaming.

In the next few weeks, DeoVR will start supporting turnkey 4K 60FPS 180º stereo live streaming with one-on-one voice chat via custom-built cameras. Details can be provided upon request.

Also DLNA and network support is coming to Deo soon.

Read also:
4 days ago
Subtitles, sorting and more in the huge DeoVR v13.6 app update!
We have a huge new update for the DeoVR app. Version 13.6 is full of exciting new features and helpful improvements to make your VR experience even better than ever.  Please note: DeoVR for th...
9 days ago
DeoVR now available on the Pico store!
Great news for all you PICO headset owners: the DeoVR app is now available in the PICO store! The DeoVR app has been through all the necessary checks and is now available for all PICO users in th...
27.12.2022
Meet the DeoVR team at CES 2023
We’re delighted to announce that the DeoVR team will be attending CES 2023. We will be at the Venetian Expo in Las Vegas from the 5th of January to the 8th, showcasing the groundbreaking new fea...
Categories
All