This workshop will introduce you to the new fish-eye standard of VR videos. Together with lens removal technique it offers more immersive VR at a higher pixel efficiency compared to standard equirectangular projection. The originally recorded fish-eye video is matched by the DeoVR video player projection mesh, based on the camera lens profile. Enjoy bigger FOV with fish eye at no extra cost on file size, rendering or video decoding resources required.

We have uploaded the pre-set files for Mistika to Dropbox - click on this link to download them for use in the workshop below.

Each camera on the Zcam K2 Pro MKX200 records in 3696x2772 px 60FPS 200° FOV. Fish-eye projection utilizes the full 200º FOV at 5800x2900 px stereo output, which is commercially described as 6K. With the same tutorial you can also work with ZCam K1 Pro VRCA220, MKX220 and MKX200 lenses. 220° lenses will be rendered accordingly. To ensure fish-eye video is recognized by the DeoVR video player add _VRCA220, _MKX220 or _MKX200 to the filename and the correct projection will be used automatically. On the other hand equirectangular distorts the image on the poles, which is then squashed back on a virtual sphere in the player.

Equirectangular projection requires you to choose between a 180º or 360º projection meshes with no other option in between. To utilize the camera's 200º FOV you would have to pack it into a 360º projection mesh at 5400x5400 px, filling large parts of the image with empty pixels, or cut it to 180º at 5400x2700 px. These are the possible formats:

The extra 20º FOV gains of fish-eye together with the “recovered” lens image are crucial when viewing in VR. It adds immersion, which is otherwise broken with empty areas, and compensates for the head movements we naturally make all the time.

Also, fish-eye footage has been shown to be faster to render and decode. The videos are a lower file size and bitrate while providing the same or better quality compared to an equirectangular render.

Although the K2 Pro camera records in 10-bit depth, it’s recommended to render the master file at 8-bit at 100-120Mbps. Original 10-bit footage gives a significant advantage when color grading, even if it is later converted to 8-bit. When 10-bit HDR screen headsets come to market it will be beneficial to release the 10-bit footage. At the moment there’s no advantage to displaying 10-bit video on the 8-bit screen used by current VR headsets and there is no 10-bit headset expected any time soon. It is worth noting that 10-bit videos come at higher file size.

1. Prepare single frames with an overlay of a circle and a cross by positioning it as close as possible to the center of the lens. The diameter of a circle for Zcam K2 Pro is approximately 2850 px. 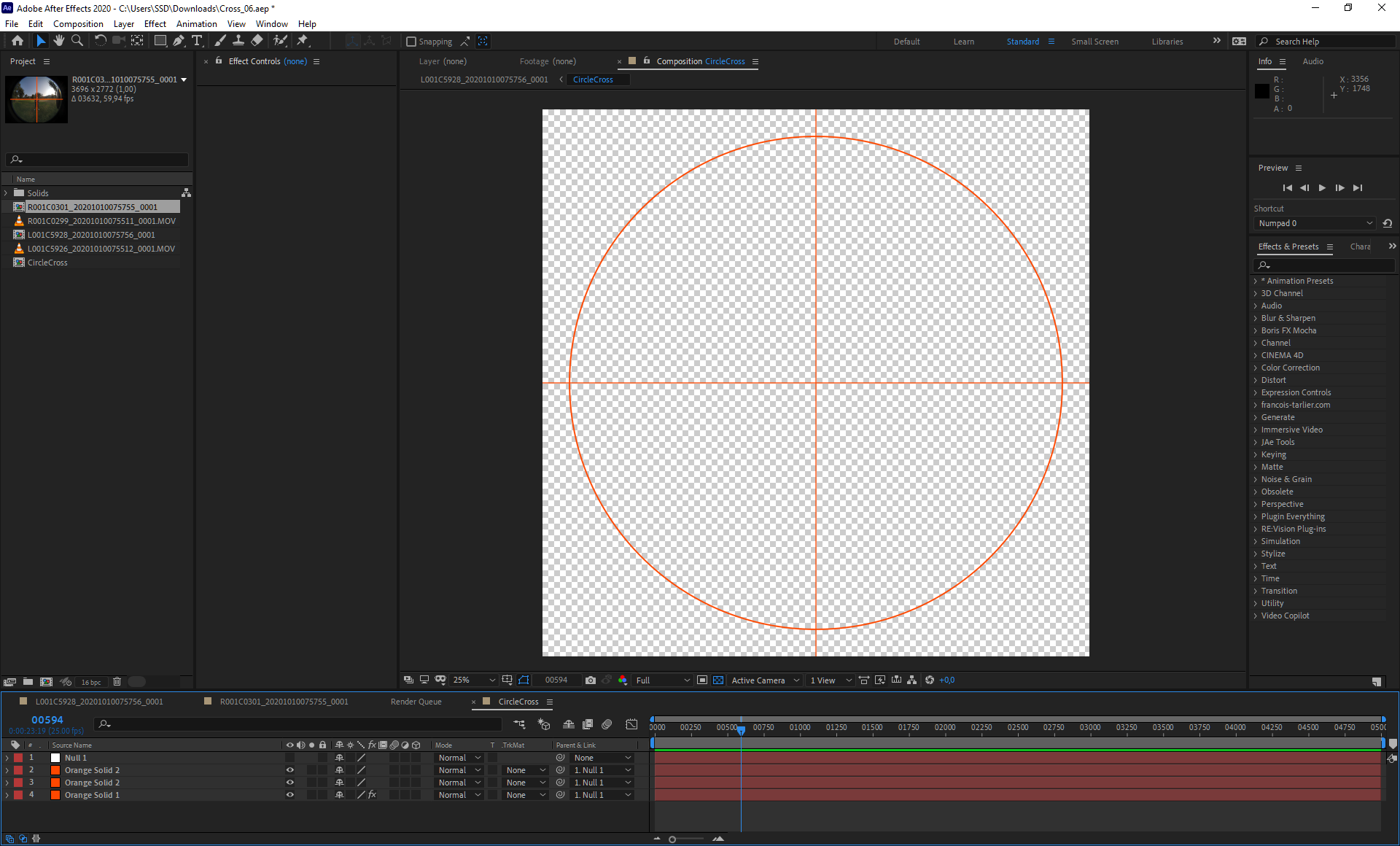 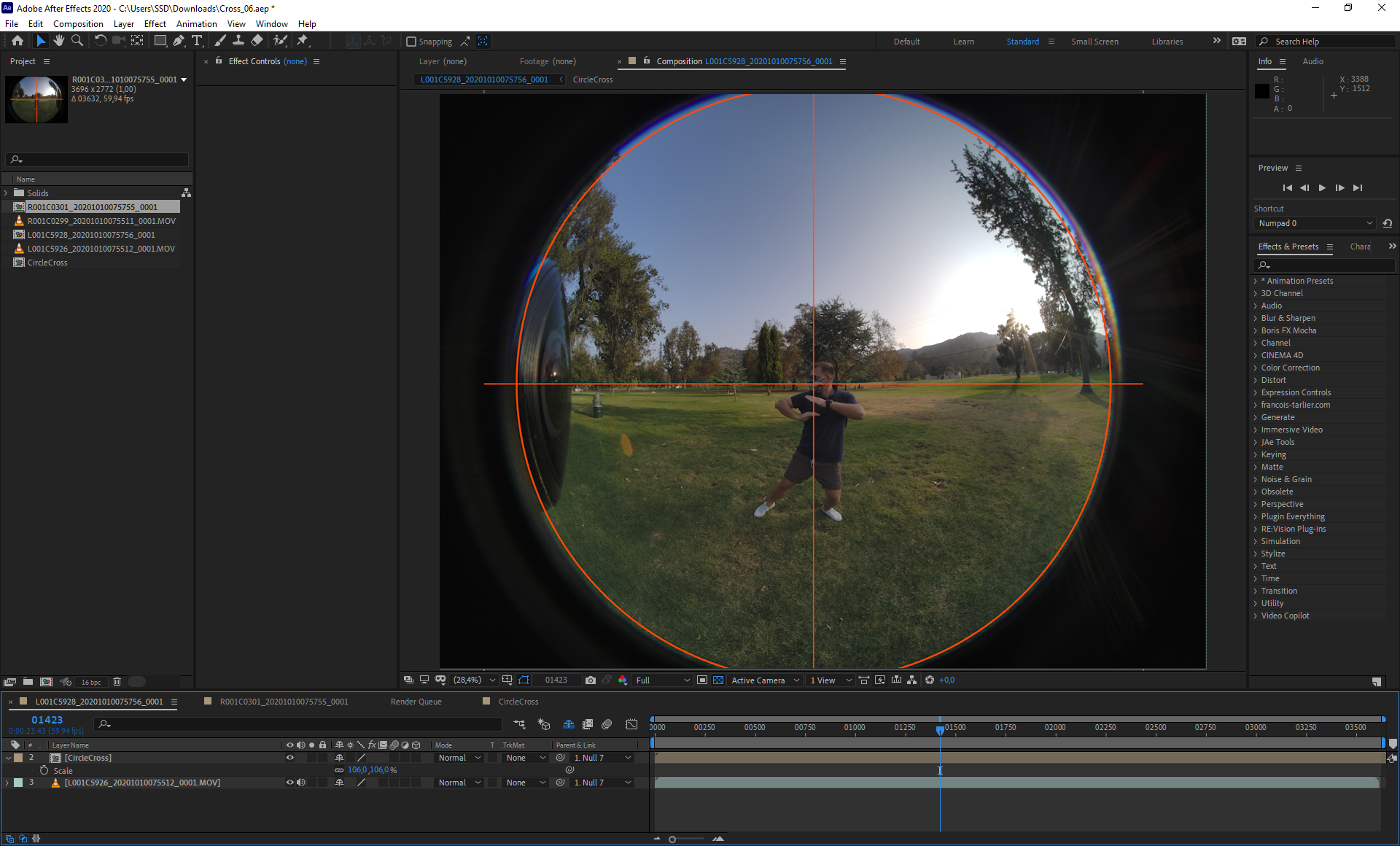 2. Add a VR Stitch node, set up the cameras and fix the stereo alignment just as you would with equirectangular projection.

3. Go to VR Stitch -> Output Camera -> Mapping and set it to Equidistant Fisheye. 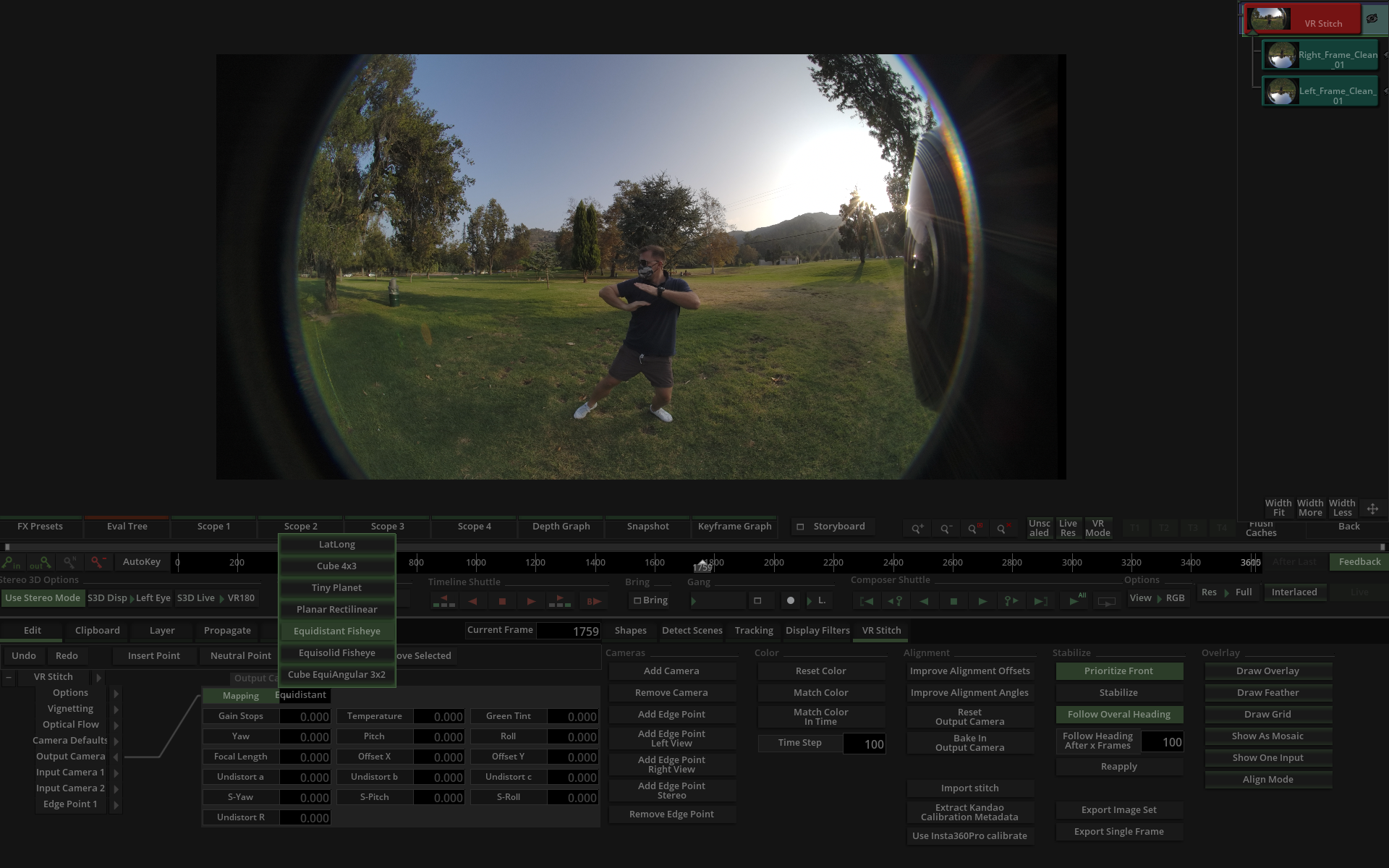 4. Fit the fisheye into a square. Replace the footage with the frames you prepared in step 1. Add a Framing node over VR Stitch and set its Crop / Left value to 25 and Crop / Right to 75 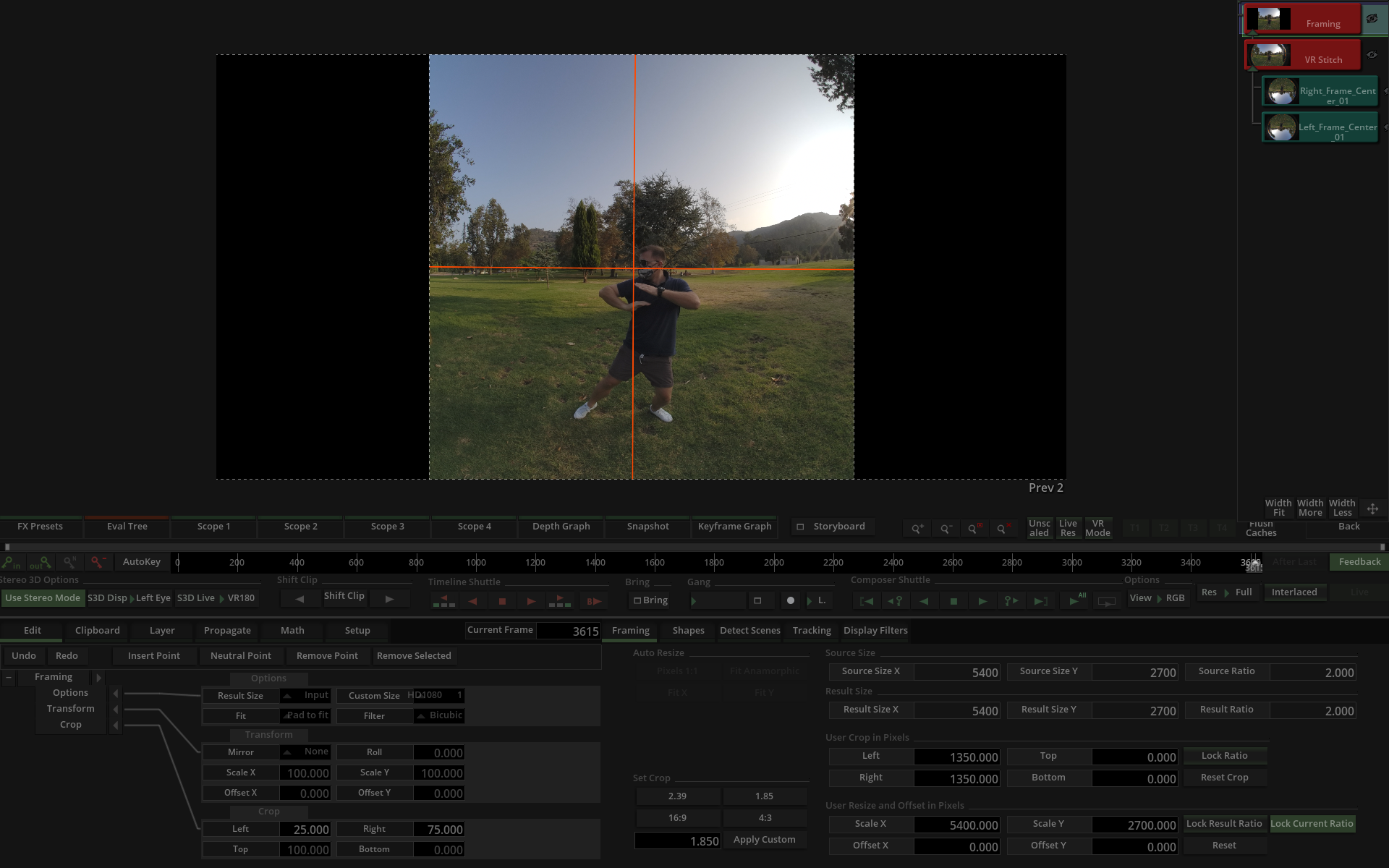 5. Go back to VR Stitch -> Output Camera -> Focal Length and use it as a scale to fit the circle overlay diameter into the bounds of the crop. Also position each Input Camera / Offset X so the overlay circle fits in the crop horizontally. Do this for both cameras! 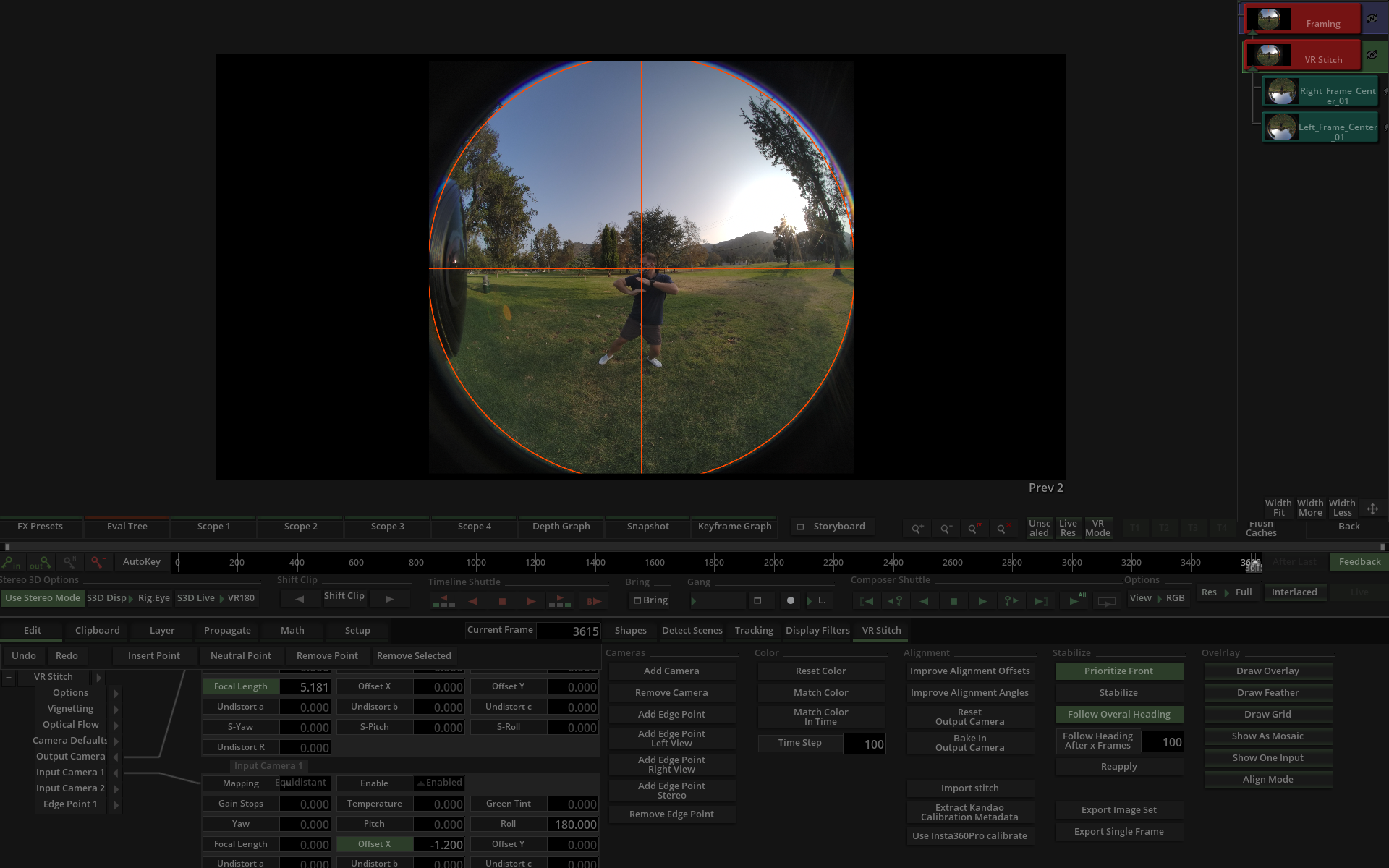 6. Continue to fit the cameras vertically by adjusting Output Camera / Offset Y. You can make it easier by going to Stereo Mode / Mix and enabling Grid Overlay so you can see both vertical centers, and move their average position on the center grid line. 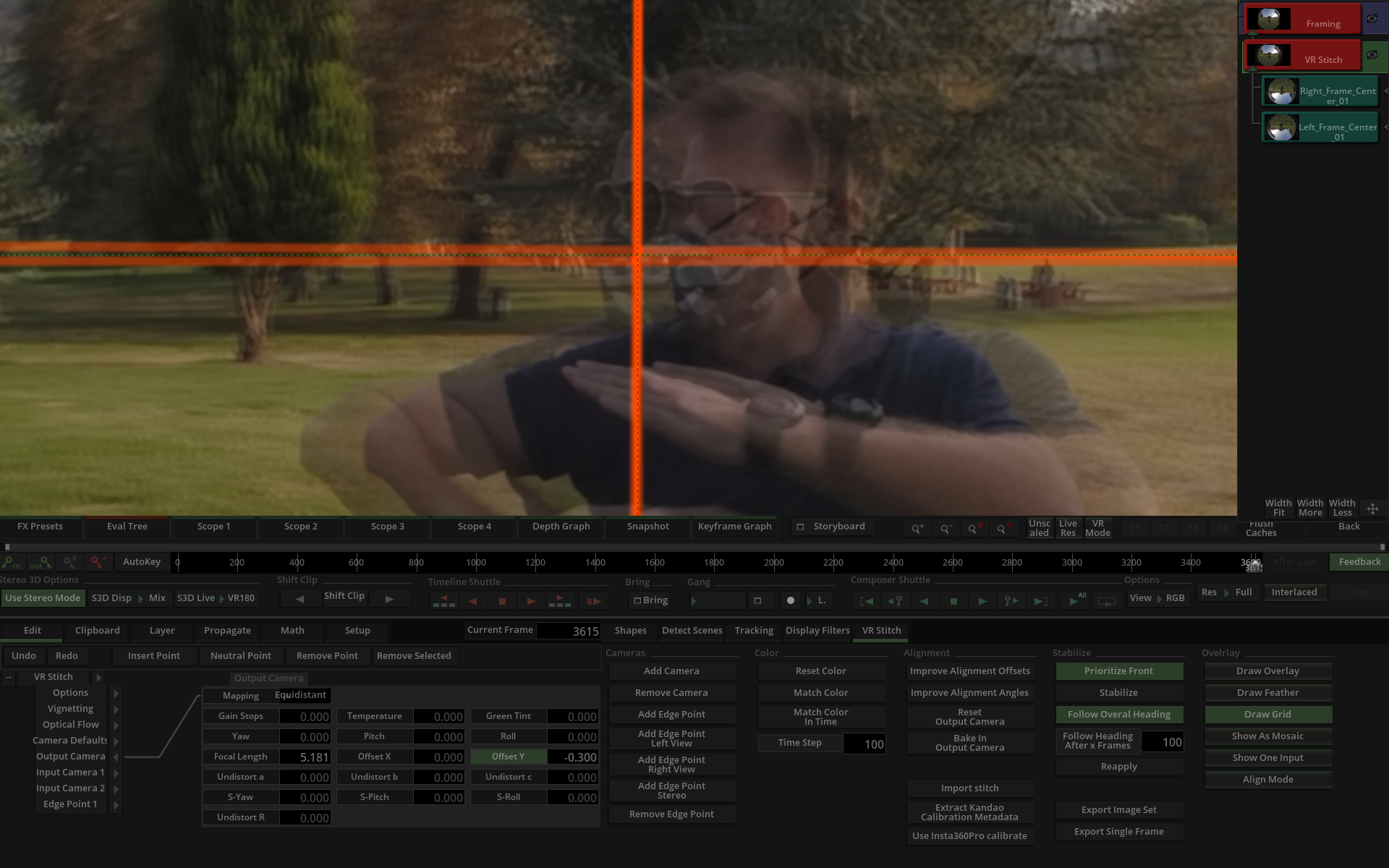 7. Replace frames with overlay back to footage and render out.

Read also:
30 days ago
Everything you need to know about the recent Android Overlay update to DeoVR
We recently updated DeoVR to include Android Overlay, but what is this functionality and how will it affect the VR experience? Here’s everything you need to know about this useful new improvemen...
21.05.2022
How to reduce noise when filming with the Canon R5C
In our previous blog post, we reviewed the brand new Canon R5C VR video camera and now our team has come up with some useful techniques for getting the most out of this impressive piece of kit.  ...
12.04.2022
Reviewed! The brand new VR video camera Canon R5C
Great news for all VR creators: Canon’s new high-end EOS R5C is an incredible tool for producing high-quality virtual reality video in stunning 180º 8K60FPS. The videos is also availab...
Categories
All